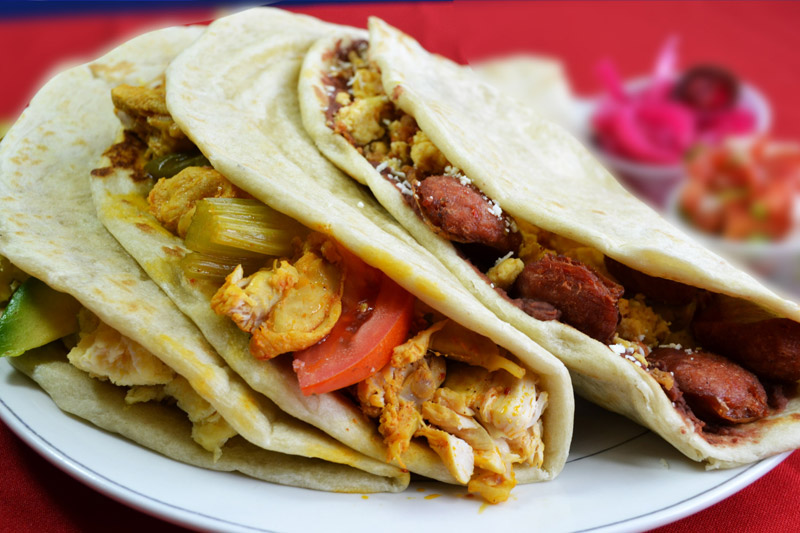 One of the best ways to experience life as a local and explore the culture and traditions of a new place is to try their cuisines and indulge in snacks and treats that are famous in the area. For Roatan, the most popular cuisines are almost always seafood based, as fishing is one of the top activities and source of income. But that doesn’t mean that you can’t get a variation of other cuisines in Roatan. Baleadas is a very common street food in the area, and although you might be hearing about it for the first time, you’ll be hooked once you try this delightful treat.

As Roatan and Honduras has major Spanish influences in its culture, the same applies to the food items as well. Baleadas is a variant of soft tacos with a few differences. It is a traditional Honduran food that is made from flour tortilla and folded in half like a taco with a variety of fillings inside. Almost all varieties of the dish have mashed fried red beans and crumbled cheese inside with other ingredients. It originates from the north coast of Honduras.

The most commonly found type of baleadas is called ‘baleadas sencillas’ or simple baleada. It consists of mantequilla (sour cream) and crumbled cheese. Another type is called ‘baleada mixta’ or mixed baleada that also has scrambled eggs in it and makes for a mean breakfast treat. Other variants of the dish may contain plantain, hot sauce, chicken, meat, pork, chorizo, sausage and crunchy vegetables like bell peppers, onions or a tomato salsa like tacos. You can even add avocados or guacamole to the dish to really give it a Mexican twist.

The best kind of baleadas are the one made with homemade flour, as they have the true authentic taste. You’ll see swimmers and divers grabbing a couple before they make it into the waters, or have a more stuffed variety later as a complete meal to end the day.

History behind the Name

Baleadas is a name you don’t hear every day. In fact, outside Honduras, you might never hear about the dish at all. There’s an interesting history and reason behind calling the dish by this name. Many believe that the dish originated in the La Ceiba region of Honduras, which is located on the northern coast. As for its name, you get to hear two popular theories, each more thrilling than the other.

The word ‘bala’ means bullets in Spanish, and it’s said that the dish is named baleadas because the beans that make the main component of the filling resembles bullets. The other theory states that there used to be a tortilla making woman in the city who was brought down by several bullets, yet she recovered from it and continued making the delicious tortillas. Hence the workers started calling the tortilla dish she made ‘baleadas’ which can loosely be translated to ‘the shot woman’.

Regardless of its origin, it’s a delicious treat and a very common and inexpensive street food item that you must try at least once during your visit.