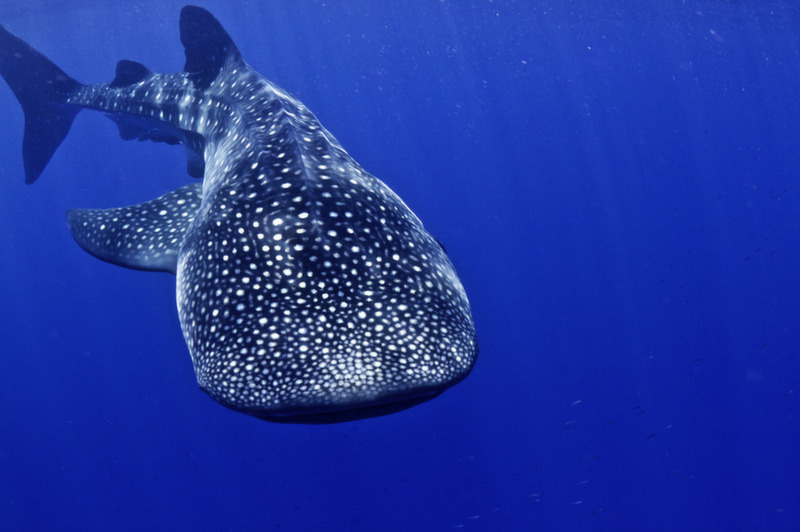 The Honduran coastline has a vast variety of marine life, in particular the Bay Islands which are surrounded by pristine coral reef. Divers and snorkelers flock to these islands to enjoy this outstanding natural underwater world seeing a huge range of sea life ranging from tiny creatures to the impressive and massive whale shark.

Typically the island of Utila is known as one of the best places in the world to spot the whale shark, but this February visitors and habitants of Roatan got to enjoy these fascinating creatures. One of Roatans dive masters, who has been a resident of Roatan for one and half years just now got her first encounter with this fish, after frequently seeing them on the island of Utila.

Whale sharks (Rhincodon typus) spend their time in tropical and temperate waters around the world, and can grow to over 12 meters in length making them the largest fish in the world. Their typical coloring is dark grey with random white spots and lines on their body. Despite their slightly daunting appearance they are the least fearsome of the shark family and are not aggressive creatures, being fairly solitary fish. As they move through the ocean at a slow speed of approximately 3 mph (5kph), they are using a filter system which provides them with delicious zooplankton and small fish such as shrimp. Whale sharks can be easy to distinguish from other sharks not just through their moveable color but also because of their flat wide heads and humped backs and broad mouths.

People sight these extraordinary creatures each year especially fishermen, and this year many people had the opportunity of catching a glimpse the whale shark in a period of about 5 days in Roatan. Dive shops headed out in numbers to try and see the shark. An experienced diving instructor describes the technique used by most of the boats to locate a whale shark. They observe a pool of bubbles on the waters surface created by lively fish surrounding the whale shark. Another sign that a whale shark is present is seeing excited birds ascending into the water to catch the sea life encircling the shark. The instructor depicts the sight of the bubbling water as a pot of boiling water. Small fish surround the whale shark because they also feed off the zooplankton. The profusion of these fish attracted larger fish such as tuna. One diver witnessed two other species of shark on his trip, the makos shark and the bull shark, which came to the area to feed off the larger fish in the same location.

The unusual numbers of whale sharks seen around Roatan are thought to have been because of an irregular upwelling current which attract nutrients to the surface of the water. Algae delight in these nutrients, and zooplankton feed on the algae. The significant amount of zooplankton attracted approximately 12 whale sharks within 5 days. Even though they are solitary creatures they were all following the same current, and therefore people were fortunate enough to see more than one of these fascinating species.