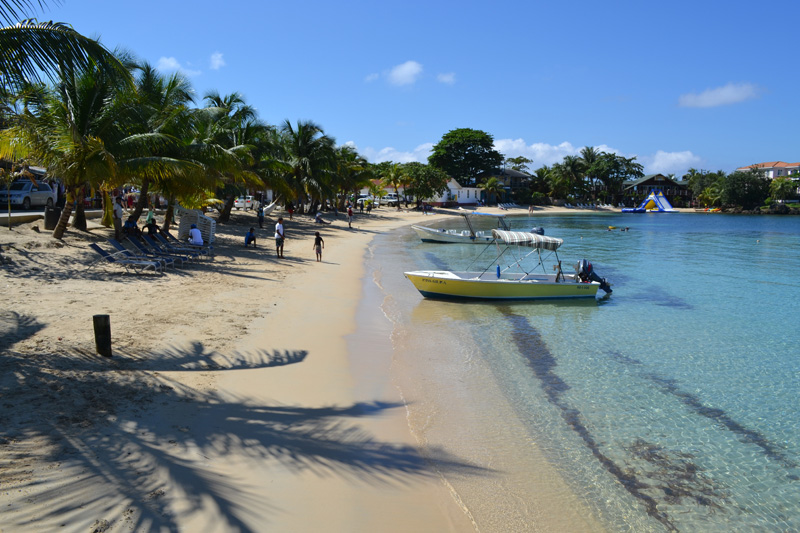 On Sunday April 2nd, 2006 the community of West End had a carnival of sorts. The purpose of this event was to raise funds for the construction of a new police station in West End, the location still to be decided. The event was organized and produced by the newly created West End Security Committee.

It started at 2:00 pm and ran well into the evening past the advertised time of 7:00 pm.

A good time was had by all the participants and the main attraction was the make shift bamboo jailhouse that was erected on the West End road near where Derry’s Diner used to be. There were also tuk tuk rides provided by the national police for a fee and inner tube rides behind a boat out in Half Moon Bay. All proceeds were to be diverted for the construction of a new police station.

The workings of the jail went something like this. You would see a couple of police officers walk up to someone with a slip of paper in their hand and escort them to the bamboo jail. The piece of paper was a “denuncia” that a friend or loved one and in some cases, a not so loved one had paid a fee to the police to have a particular person jailed. The time spent in the jail cell varied from 10 minutes to 30 minutes at which time the person jailed could be bailed out by someone on the outside or they could bail themselves out. There was no lack of jailbirds for this event. Some of the islands best known people found themselves being walked up to the jail entrance, a number being hung around their neck and then their photo being taken before being asked to step inside the jail. 2 participants actually escaped from the jail, and then simply walked across the west end road with their numbers still hanging around their neck and sat there until someone pointed them out to the police that they had escaped. Their fines were doubled for having escaped. The police participated directly throughout the day jailing anyone whose name wound up on a “denuncia”. There were even some repeat offenders who went to jail more than once. Everyone had a smile on their face as they were being jailed.

Barbequed chicken with beans, rice, cole slaw and chimol and biscuits were sold and served throughout the day as well as what is believed to be the first and only snow cone machine on the island. Beer and refreshments also were available to the public.

Auctioneer Tony did his auction in the late afternoon to a crowd of competitive bidders to add to the total proceeds of the event.

This event was done with very little notice and almost no advertising and still raised over $3000.00 towards the construction of a new police station. One of the organizers Daine Wood Etches said “It was good to see the community of West End and its residents, both foreign and Honduran, rally and respond in such a positive manner and in such a short amount of time.”