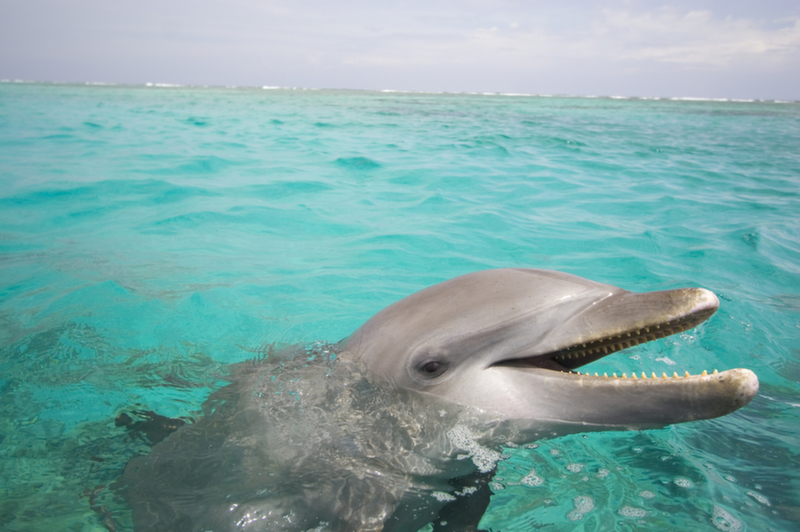 There are many dolphin activities offered at Anthony’s Key Resort in Roatan, Honduras. With a scuba diving or snorkeling package, you will receive an amazing beach encounter with the dolphins.  Imagine being able to touch, swim and even dive with these fascinating animals. These animals, often thought of as cute have so much to offer.

After meeting at the Roatan Institute for Marine Sciences (RIMS), one of the dolphin trainers gives you a brief introduction about the dolphins, and then you take the boat over to Bailey’s Key, where they live. They break you up into groups, and you can head to the beach with your dolphin trainer. The trainer will have the dolphin come up right next to the group, and you get to pet the dolphin, while they tell you more information about them. The trainer goes through some hand signals with the dolphin so you can see them doing flips in the air, pushing themselves out of the water with their tail, and waving. Then you can give the dolphins a hug, and let them kiss you on the cheek.

After the beach encounter, for an extra fee, you can join the dolphins for a snorkel or swim. This is done in the same area, and you can interact with the dolphins when they swim by. They love to play, and will catch grass you throw to them in the water. They do best when you let them approach you, since they are very curious.

I signed up for another dolphin experience, called Trainer For a Day. This was by far the best of the dolphin experiences. I started my day just before 8:00 by checking in at the RIMS desk. They took me down to the “fish house” and introduced me to Edgar, who would be my trainer for the day. He was already working on sorting out the fish for the dolphins. He was separating the damaged fish from the good, and weighing them in order to get the appropriate measurements for each dolphin. After getting all of the fish cleaned, sorted and weighed, we cleaned out the sinks and the floor and took the dolphin coolers out to the boat and headed over to Bailey’s Key.

I was able to stand next to Edgar while he was feeding Cedena and got more interaction with the dolphins while he told me more information about them. Since I was there during a beach encounter, they went through the hand signals again, so I got to see the dolphins do more tricks. We went back to RIMS and I watched an informative video about the dolphins. After a break for lunch, we met in the fish house to get the next meal ready for the dolphins. Instead of going down to the beach area, I went with another trainer to do some hand signals. The trainer showed me how to do some of the hand signals and said that the dolphins love positive re-enforcement after they perform a behavior properly. It doesn’t always have to be with the fish, sometimes it’s good to keep the rewards different so they don’t get bored and expect the same thing every time, such as petting them or verbally letting them know they did a good job.

Doing the hand signals with the dolphins was very fun. After that, Edgar took me out to one of the floating platforms. He brought two of the male dolphins out, and we went through some more hand signals. Then it was my turn to get in the water with them! He had them give me a dorsal fin ride, which was great. I was screaming with joy, and some kayakers and a snorkeler were watching us have a good time. Then we tried to do the foot push ride, which was very difficult. The dolphins know exactly what to do, but I had trouble keeping my body straight and out of the water. I fell several times, but I don’t think the dolphins cared, they were having fun.

Sharing my time with the dolphins was an experience I’ll never forget. They are wonderful and seem to be very happy at Anthony’s Key Resort; they are also very well taken care of, and get plenty of playtime and interaction with people. All of the staff at Anthony’s Key Resort were extremely friendly, and it really made our stay feel like a once in a lifetime trip to paradise!