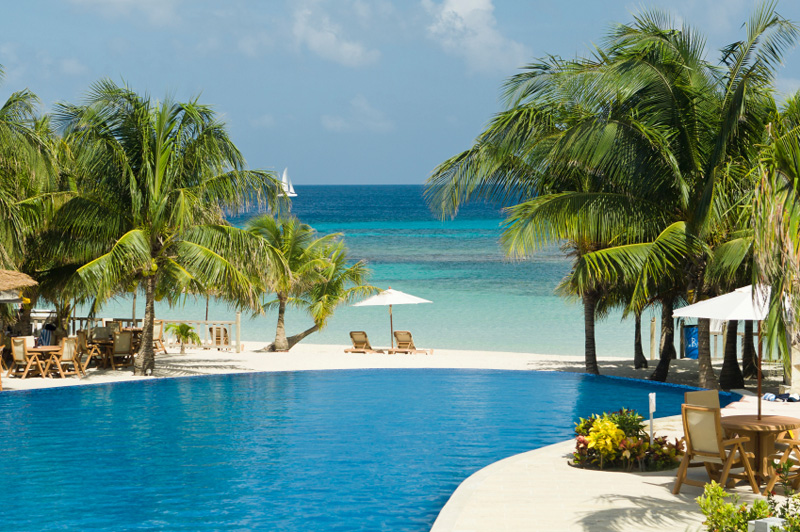 Fox Studios camera and sound crews follow young couples up and down the streets of quaint West End, filming every move and taking in every sound during the day as they get to know eachother. At night, resorts such a Palmetto Bay Plantation and well-known Roatan restaurants are set up for private dates and romance.

These liaisons are interspersed with private day trips to Roatan’s tourist spots and to the Mayan Ruins of Copan.

Shortly a high percentage of American and Canadian reality program TV fans will know where TI3 was filmed. Yes, Temptation Island 3 was shot in Roatan, Honduras and will be airing in the upcoming months.

Whether you are a reality TV fan or not, the program will be a must see for those with an interest in Roatan and Honduras. The wonders that many of us know exist will be displayed in their entire splendor on the little screen. Previous Temptation Island series have provided the host countries and locations with quality exposure and with huge increases in Tourism and visitor numbers. Those in the know say that this version will have especially high exposure for Roatan and Honduras.

Some may be interested in finding out what will happen during the upcoming series. All a Roatan resident such as myself can say is, “They came and now they have left.” Each one of the Fox Studios’ personnel signed non-disclosure agreements, effectively sealing the mouths of anyone directly involved. Even after plying the crew with many drinks, not even minor accounting and logistical information was divulged, let alone the steamier facts.

The best guide we can give Temptation Island fans about the upcoming series is to be ready to see the beauty of Roatan and Honduras. Fox could not have chosen a better location as a backdrop for a modern day seduction story. White sandy beaches, a diverse underwater reef, amazing red Caribbean sunsets, funky and laid back West End and the many friendly faces that make Roatan’s famous atmosphere were captured, along with the wonders of a past world, the Mayan Ruins of Copan.

If you are a Temptation Island Fan you will surely want to beat your friends, and especially the crowds, and visit Honduras in the footsteps of Temptation. Here are a few travel tips:

Plan a few nights in West End dining in the restaurants where that Temptation was played out. The atmosphere alone of these restaurants leads a visitor to temptations of another kind, usually involving food and drink.

If you are looking for serenity and isolation, give the East End of Roatan a try. Miles of uncrowded beaches and verdant hills will be your only distraction.

Though little is known about what happened on Fox’s trip to Copan, be sure to include an overnight trip into your plans, the ruins are unforgettable and the town itself has a kind of charm and atmosphere that is rare to find.

One last tip, hot tubs can be a seductive place and if you know what does happen in the upcoming series and somehow the spa was involved, you can check it out at its relocated home at Casa Calico in West End where it stands in all its former glory. Though the Spa may have seen its hottest nights, it is occasionally back in action with bubbly fun, cool drinks and some Roatan heat.

So to reality program fans, keep your eyes on the TV guide or just go ahead and plan your upcoming trip to Roatan and Honduras. For those who can’t come now, visit after you’ve seen what Roatan and Honduras has to offer. Get the couch and popcorn ready as there is nothing like some Temptation.