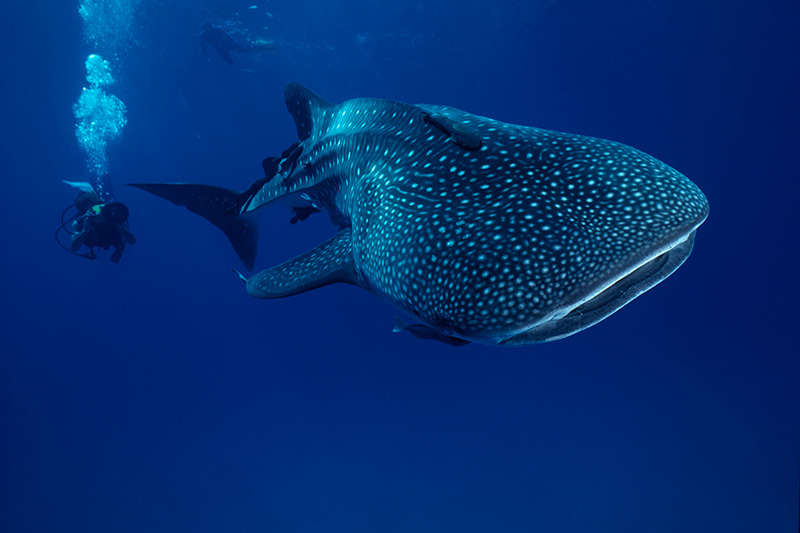 Utila fishermen have always spread stories about one very large fish that visits the waters that surround the island, which they called the ‘Old Tom’. Today this huge fish is known and widely recognized as the Whale Shark. Utila is famous as the Whale Shark Capital of the Caribbean, whose waters are regularly visited by these sea creatures. The organization called Whale Shark and Oceanic Research Centre is situated in Utila, and this research center has a permit to research and study the amazing whale sharks that come to the Honduran waters.

The whale shark is the largest fish in the ocean that can grow over twelve meters in length. The whale sharks that visit waters of Utila are usually between five and ten meters long and weigh around fifteen tons. Despite being so huge, whale sharks only eat plankton. Because of its eating habits, the whale shark poses absolutely no danger or threat to humans. How long these sea fish actually live is not known, but is estimated that they can live over hundred years.

Whale sharks are still very mysterious and shy creatures that are hard to study. It is still unknown where they give birth, and there is still no explanation why the young species of whale sharks have tendencies to swim in a group of large numbers at certain periods of the year and in certain sea waters around the world.

Whale sharks can regularly be spotted in the waters around Utila Island all year round, although they come more frequently in spring months and early autumn. Unlike dolphins, for example, whale sharks are usually swimming solitary and it is not uncommon for several singular sharks to be spotted in a single day in the waters around the island of Utila. These amazing sea creatures can travel very long distances and have been recorded to travel several thousand miles.

So which times of the year are best to see the whale sharks in Utila? Well, Utila is unique because you have good chances to see them all year long, but usually the main season when they can be spotted starts at the end of February, goes through months of March and April, and then also the whale sharks can be seen in smaller numbers in the months of October and November.

One of the reasons why the whale sharks are congregating around the island of Utila is the unique oceanography. Utila is located on the farthest northern part of the Honduran shelf, and the main difference between Utila and the other Bay Islands is that the tropical island of Utila has very shallow banks on its southern side and a very large and deep bank to its north side. Besides whale sharks – dolphins, kingfish, and swordfish can also be spotted in Utila`s northern waters. Utila is also a unique place worth visiting at any time of the year.

We recommend visiting our Roatan, Utila Dive Shops for more information on Diving with Whale Sharks.