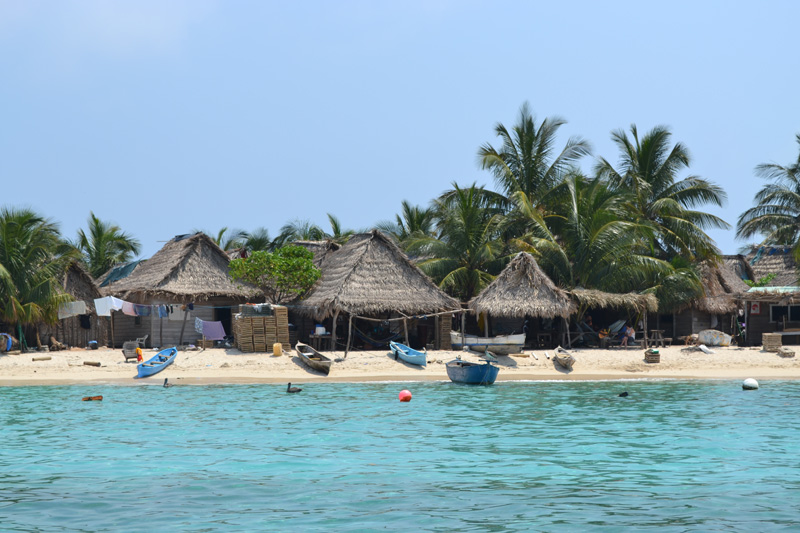 The Bay Islands were originally inhabited by Paya Indians, a seminomadic tribe that lived in non-permanent structures, and carried out subsistence farming and fishing as well as trade with other tribes from the mainland. They also produced simple ceramic items, the remnants or shards of which are today affectionately referred to as “yaba ding dings”.

The first recorded interaction between Europeans and the Paya was in 1502 when Christopher Columbus, during his fourth voyage to the new world, landed on Guanaja and traded with them for food supplies and water. During the 1500s, Honduras was claimed by Spanish Conquistadores, who enslaved the Paya and began to use the islands to provision their ships, but did not establish permanent settlements. Not long after, English pirates seized the opportunity to raid the Spanish supplies. Thus began the battle for control of the Bay Islands. England was interested in the rich stands of timber and sent soldiers and colonizers to establish outposts along the length of the Caribbean coastline and the Bay Islands, while Spain was colonizing and mining the mainland. The clash between the Spanish and English dragged on for nearly three centuries.

The first recorded British presence on the Bay Islands was the short lived colony founded by William Claiborne in Port Royal (1638 to 1642) which was largely comprised of log-cutters turned buccaneers who were eventually ran off by the Spanish Navy. History again shows British occupation in 1742, with the formal construction of a naval fortification in Port Royal, this was a strategic move as part of the British attempt to gain possession of the Central American coast. Records show that by 1775 the fort was well established and inhabited. A famous and perhaps the first official map of the island of Roatan was surveyed and drawn by Lt. Thomas Jeffery.

After a fierce battle in Port Royal in 1782, the Spanish gained control of Roatan, and subsequently moved all the native Indians to the mainland for abetting the British. It wasn’t until 1797, when approximately 2,500 Garifuna were forcibly removed from the island of St. Vincent by the British and stranded on Roatan that the first real settlement was established. The Garifuna are the Afro-American descendants of shipwrecked African slaves and Arawak Indians from the island of Saint Vincent. Although the Spanish later transferred most of these Garifuna to Trujillo, a few stayed on and formed the village of Punta Gorda, which still exists today. You can visit Punta Gorda for a cultural immersion visit and enjoy a traditional meal and see native Garifuna dances.

Although the Spaniards were in control of the islands, they made no attempts at establishing a colony there and in 1821 the Central American Federation declared independence from Spain and claimed sovereignty over the islands, but still they remained virtually abandoned until the late 1820s and the 1830s when British colonizers (both white slave bosses and negro emancipated slaves) began arriving from both the Cayman Island and Jamaica. It is from these families that many of today’s Bay Islanders are descended.

By 1842, a thriving British community had again formed in the Bay Islands. The colonists, in protest of the Central American Federation, hauled down the Central American flag, hoisted up the Union Jack, and claimed Roatan for Britain. Bonacco (Guanaja) and Utila soon followed with the raising of the Union Jack. In 1850, Royal naval estimates a population of “five to six thousand”. In 1852, at the request of the colonists, the British Governor of Jamaica became the governor of “Utila, Rattan, Helene, Barbarette, Morat, and Bonacco”, which was officially recognized by Her Majesty Queen Victoria as “The Crown Colony of the Bay Islands”. Unfortunately for the colonists, word reached Washington of this development, which was viewed in direct violation of the Clayton Bulwer Treaty that stated that, neither the US or Britain could claim or seek to possess more colonies or possessions in the Western Hemisphere. A war of words raged between Washington and London for years until 1860 when the British Consul in Comayagua agreed to relinquish possession of the Bay Islands as well as the Moskitia Coast. On April 22nd, 1861 the Treaty to annex the Bay Islands and the Moskitia Coast to Honduras was signed.