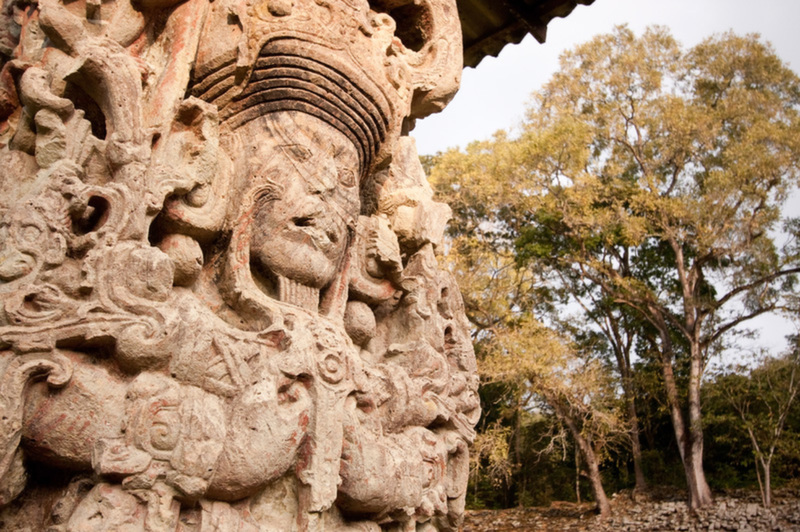 Honduras has a variety of attractions to offer travelers, and one of the main attractions is the remains of the ancient Mayan city of Copan. The mayas are thought to have arrived in Honduras as early as 1000 BC settling in North Western Honduras on the beautiful plains of the Copan River. Check it out!

There is archeological evidence that the Copan Valley has been inhabited since as early as 1200 BC. However it was not until AD 426 that Copan was ruled by a royal family. The first King Mah K’ina K’uk’ Mo’ ( Great Sun Lord Quetzal Macaw ) was praised by later leaders as the founder of the kingdom. It was in AD 628 that Copan began to develop significantly when King Smoke Imix ( Smoke Jaguar ) came to the throne. He was responsible for developing Copan’s military and commercial sector. This led to an increase in population and at its peak Copan is thought to have been home to more than 20,000 people. Copan is not the biggest Mayan City in Central America, however it was the predominant cultural centre during the Mayan period. It mounted to be highly advanced in its evolvement of sculptures, astronomy and hieroglyphic writing.

In AD 749 the most famous monument the city ever saw was erected, the spectacular Hieroglyphic Stairway, by King Smoky Shell. The stairway was created in order to perpetuate the success of the kingdom. The inscription found on the hieroglyphic staircase is the longest inscription found in the Mayan world. Initially it was thought that the hieroglyphs found in Copan were firmly rooted in astronomical and calendaric calculations. Through recent investigations it has been discovered that the script actually refers to the life and times of the Mayan rulers. There are more than 1250 glyph blocks in its inscription. The stairway is important because many monuments of previous rulers had been destroyed by their successors, and the stairway provides the names and dates of the rulers and furthermore it narrates battles and conquests of these leaders.

Copan Mayan Stela
The final ruler of Copan, U Cit Tok’, came to power in AD 822, it is still unknown when he died. It was during the reign of U Cit Tok’ that the kingdom began to diminish. A symbol of this tragic downfall is Altar L which in AD 822 the king commissioned a monument to represent his time in power, however it was never completed.

It is only recently that archeologists are beginning to comprehend the reasons behind the collapse of Copan. Amid the last few decades the city saw and immense population growth, and this was a huge strain for the land, which the people of Copan were being agriculturally active on, leading to environmental degradation. The civilization began to migrate to other areas of the valley which were not designed for settlement. Many areas were deforested, and during the monsoon season the land would subsequently flood as there was an increased lack of vegetation to absorb the water. The society not only had to cope with floods during a period climatic fluctuations, but also intense droughts. Scientists have found evidence of malnutrition in the remains they have discovered, and during this period life expectancy decreased dramatically. The valley was not abandoned by the society instantly, it is thought that it was still inhabited for another one or two hundred years.

The first recorded discovery of the ruins was by Diego Garcia de Palacios on March 8th, 1576. It was not until three hundred years later that the history of the ruins was investigated. Archeologists are continuing to make new discoveries in the site. They have divided the site into five phases and it is the fifth phase that is visible to people today. However layers of the other phases are buried underneath the standing ruins. These remains are beginning to be explored today through the means of underground tunnels, two of which are now open to the public.

The Copan Guide Association offers informative tours of the Copan Ruins, which can be organized at the park entrance. Guided tours start at $20 for a group of 1 to 10 people, which is an exceptional value. Tours are available in English, French, Italian, German and Spanish. You can also book a tour ahead of time if you like by calling the Guide Association in Copan on (504) 651-4018 or by email Click Here.The Copan Guide Association also offers horse riding tours, city, hot spring, cave, cultural and birding tours in and throughout the Copan Valley and area.