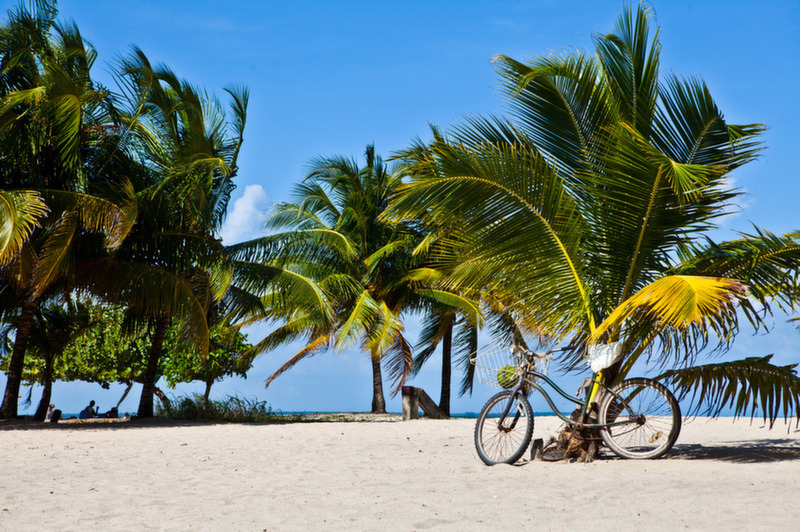 I first met Dorothy Reid four years ago, since then, I’ve come to appreciate the huge impact Dorothy and her husband Bud, had on the local community. These American pioneers melded with their island neighbors, unselfishly giving their time, talents and offering a helping hand whenever one was needed.

Turn the clock back. The airport is a short dirt path. One narrow dirt road goes from the landing strip to Coxen Hole. There are only two old trucks here. There is no electricity and wouldn’t be any for another 22 years. English is the only language. There are less than 15 Americans among the 12,000 Bay Islanders. The entire island is lush with vegetation and beauty with few buildings.

“As soon as I put my foot on this land, I knew I belonged here,” explains Dorothy Reid, one of Roatan’s first full time “Gringo” residents. “We fell in love with the island and the people. They were pleasant, sweet, kind and always smiling.”

A sense of adventure along with the cold Mount Clemens, Michigan winter led Dorothy and her husband Bud to Roatan in February, 1969. Although they owned a 69-foot sailboat and enjoyed chartering other boats to cruise the Caribbean, that particular year their plans changed. They ended up staying two weeks at the newly opened Anthony’s Key, which was the island’s first resort to be built as such, although it catered to fishing in those days.
The couple purchased 5.8 acres in Sandy Bay on that trip and returned for one month the following July to start building their vacation home. “There was nothing much in Sandy Bay back then,” Dorothy recalls. “There were a few modest wood stilt houses with outhouses, along with chickens and pigs in the yards.”

By 1973, Dorothy and Bud were ready to move here permanently. Their daughter Marsha was married and son Tom was in college. Bud was also ready to close the machine shop he owned and operated for 20 years. Several 40-foot trucks transported Bud’s shop, including 20 heavy duty machines, to Hybur in Miami. He set up a machine shop in Coxen Hole, however, when he developed cancer, the shop was moved to their property.

“Bud’s dream was to start a school to teach the boys to be machinists,” Dorothy explains. “However, Honduran labor laws made that impossible. Bud truly cared about the locals and helped them in any way possible, from fixing bicycles to repairing anything that broke down. He made parts for the resorts, boats, and shrimp plants. He was very nice to the local motor dory men who fished and would fix their shafts, motors, etc. for little or no charge.”

Dorothy points out that it wasn’t easy to live in Roatan during those days, especially without electricity. They had a gas refrigerator that took 24 hours to make a tray of ice cubes. Oil lamps were used at night and the whole island was dark with no street lights. However, islanders were happy, gentle and kind. And, since they had lived for generations without power, they didn’t miss it. Americans who moved here were adventurers who wanted to help the locals and improve the island. It was a close knit community, where you knew nearly everyone and problems were shared and solved.

Dorothy has been outspoken on the Roatan Yahoo Groups about the island’s vast growth and change. Most of her concerns have centered on the environmental damage being done by developers and the impact of the one million-plus cruise ship passengers. She notes that the growth and tourism have also changed the people and their attitudes. Dorothy says that although Roatan is still a beautiful place to live, the change is happening “too fast and furious.”

This Roatan pioneer still lives on the same property they purchased back in 1969, along with her Doberman Tina, Retriever Peaches and Pomeranian Sissy. Her workers, like Aminta Padilla, are like family and have been with her for over 20 years.

What does the future hold? Dorothy has considered moving back to the U.S. to be near her family, which includes five grandchildren and two great grandchildren. The thought of leaving her home and the island she loves is very emotional. Sadly, she will have to make a decision. All of us enjoying paradise, far from family and life-long friends will reach that crossroad one day.