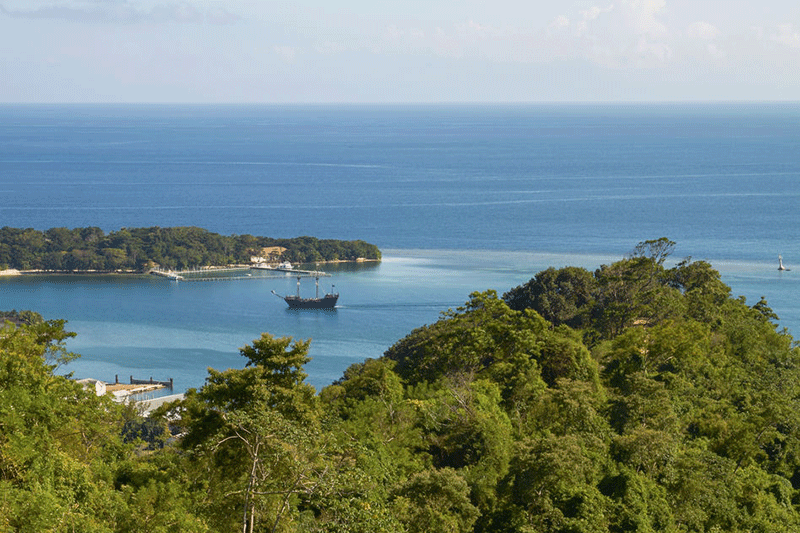 Reaching the tropical Caribbean island of Roatan is easier than you may think! There are multiple options for direct international flights, several domestic flight options, and plenty of ways to get to Roatan by sea. Let’s break down all the ways you can get to Roatan for that much-needed vacation!

Roatan is an island located off the northern coast of Honduras in Central America. It is the largest of the Bay Islands and is often called the Gem of the Caribbean for its stunning green rolling hills surrounded by turquoise Caribbean Sea.

Roatan can be reached by any of a variety of direct international flights. The airport on Roatan, the Juan Manuel Galvez International Airport (code RTB), receives flights throughout the year from both domestic and international airlines.

To fly to Roatan from Canada, you can leave directly from Toronto or Montreal on either Sunwing or Transat Airways during the winter. Direct service is usually offered from late November through April.

To fly to Roatan from other points in Central America (outside of Honduras), you can use Tropic Air direct from Belize City, in addition to Avianca Airlines coming from San Salvador. San Salvador serves as a major hub for the region, so you’ll find many flights coming from elsewhere in Central America, as well as South America, flying through there en route to Roatan.

Local flights are available to Roatan from Honduras’ airports in Tegucigalpa, San Pedro Sula, Copan, and La Ceiba. The domestic airlines are Isleña, Lanhsa, CM Airlines, and SOSA. You can also utilize domestic airlines to travel between the Bay Islands of Utila or Guanaja.

There are two cruise ship terminals in Roatan: Port of Roatan is located in Coxen Hole and Mahogany Bay is near French Harbour. Between the two ports, Roatan receives cruise ships throughout the year, bringing over a million tourists to the island for a day at a time. Western Caribbean cruises on Carnival, Princess, Norwegian, Royal Caribbean, Regent Seven Seas, Costa, and more might see Roatan pop up on the itinerary. For those cruise ships docking at Mahogany Bay, you might only see Mahogany Bay listed as the destination – that’s us, right here in Roatan!

Other Ways to Get to Roatan

Roatan also receives the Galaxy Wave Ferry from the coastal city of La Ceiba twice daily: once in the morning and once in the afternoon. This is an alternative to the short domestic flight from the coast if you’re traveling from mainland Honduras. There is also a ferry service from the Bay Island of Utila, in addition to charter boat services between the islands.

Alternatively, you can also book private charters to reach Roatan from wherever you’re traveling from! There are plenty of options by both air and sea that will offer you the unique experience of arriving to a tropical paradise via your own private transportation.

Whatever way you get to Roatan, we’ll be happy to greet you!