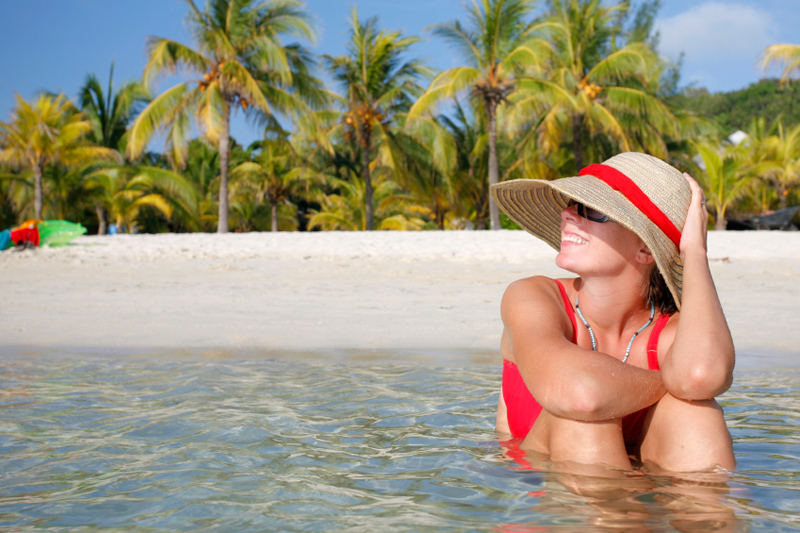 Tropical areas may have a tendency to really, well, bug you. It’s understandable – between the mosquitos and sand fleas, tropical areas might seem a bit inundated with flying pests. It may help to think of them as a reminder that this beautiful paradise of an island is reality, not a dream.

But how can you possibly deal with those tropical bugs and their itchy bites? Here are some pointers for deterring them, and for dealing with the aftermath once they’ve bitten you.

How to avoid being bitten by sand fleas and mosquitoes.

Sand fleas are prevalent in the Bay Islands. Sometimes called no-see-ums, you probably won’t even notice these guys are around until you start itching. While some people hardly react to their bites, others may find them to be incredibly annoying. If you are one of those people, you should consider applying an oil-based sunscreen with insect repellant to avoid their bites altogether. The oil is difficult for them to bite through, but if you only apply oil (coconut or tea tree are quite common), you will be more likely to burn in the hot tropical sun. It is best to combine the two efforts and use an oil-based sunscreen with insect repellant included to protect your skin altogether.

Pro tip: If you’ve been in the ocean, don’t forget to reapply insect repellant right away. Sand fleas are particularly attracted to you after you’ve been covered in saltwater. A quick rinse in a pool or shower will also help to keep them at bay.

Mosquitos are typically worst around dawn and dusk, so it’s best to avoid them during those times. They are active all day, but you probably won’t notice them quite as frequently. If you have to be outdoors during their prime times (who wants to watch the sunset from indoors?!), be sure to cover your skin as best you can. Light, long-sleeved shirts and pants are best to prevent mosquito bites. But if you just can’t handle that heat, then you’d be best prepared with an insect repellant containing DEET or picaridin. Several name brands are easily accessible in mini-marts and supermarkets throughout the island, including OFF! Active and OFF! Deep Woods. Additionally, more natural remedies are available at several locations, including at many hotels and resorts. You will find both locally made products and imported natural remedies for sale.

How to deal with mosquito bites and sand flea bites.

If your preventative measures don’t prove to be 100% effective, there is still hope to mitigate the itching. Every person reacts differently to bug bites, so there is no one-cure-fits-all for dealing with itchiness. However, there are a few simple tips and tricks that might ease the irritation at least a little.

Aloe vera: Not only does an aloe vera gel soothe your sunburn after a few hours on the beach, it also helps soothe the burning itch of a bug bite. Double-down with this easy-to-find remedy to soothe your skin.

Calamine lotion: Of course you can use the traditional calamine lotion to soothe the itch of a bug bite…as long as you don’t mind walking around looking like the Pink Panther for a while.

Antihistamine: Take an antihistamine pill to alleviate some of the reaction to the bug bites. If you are particularly reactive, you may want to continue taking antihistamine pills throughout your vacation as both a preventative against future reactions to bites and a relief from current ones.

Local lore: If you want to try some Roatan bush medicine to alleviate the itchiness from those bug bites, you’ll have to seek out Cerasee plants or Gumbolimbo trees. Boil the Cerasee leaves or the Gumbolimbo bark in water and then rub it into your itchy skin for relief. Sometimes the best solutions are all around us, especially in an island paradise like Roatan.