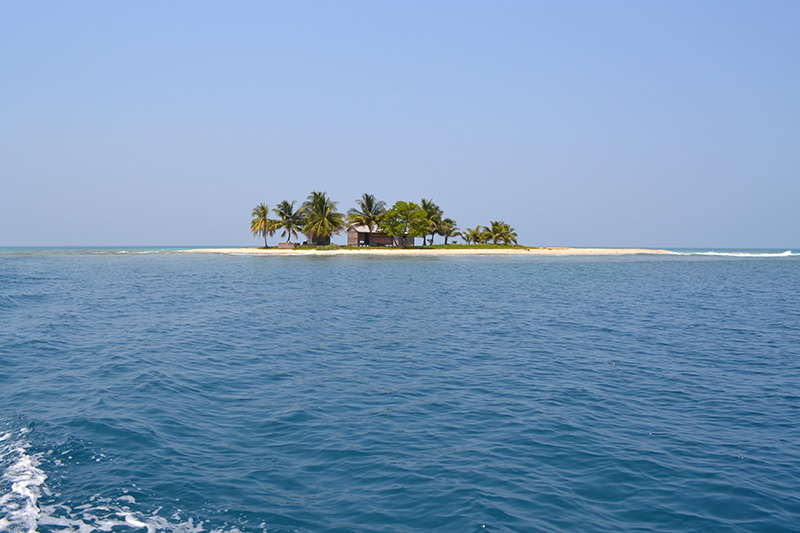 The Cayos Cochinos are a group of small islands called Cayo Menor and Cayo Grande and over a dozen small coral cays situated about twenty miles away from the northern coast of Honduras. Although Cayos Cochinos are geographically separate islands, they still belong to the Bay Islands and are part of the municipality of Roatan. They are still largely uninhabited, with just over a hundred people living on the Cayos.

There are lots of tiny islands included in Cayos Cochinos, but when people talk about the Cayos they usually refer to the Cayo Menor and Cayo Grande. Both of these Cayos are declared biological marine reserve, thanks to the unique eco-environment. Even today, getting to Cayo Menor is only permitted for scientists and people that work for the Honduras Coral Reef Fund. Cayo Grande is the island where tourists can go, but it can be reached only by boat. There is also an entrance fee charged for those that wish to visit Cayo Grande, and there are patrol rangers that constantly inspect the area to ensure that regulations are followed and to protect these unique islands from damage.

There are a couple of inhabited villages located on Cayos Cochinos. One is called the East End and the other one is Chachahuate. East End is a village of the local Garifuna people, while Chachahuate is a bit more primitive, but a nice community whose inhabitants come from Nueva Armenia, Jutiapa.

Cayos Cochinos are all managed by the Honduras Coral Reef Fund and are recognized as marine protected area. The coral reef found here is the part of the second biggest coral reef in the world – Mesoamerican Barrier Reef. On Cayo Menor, there is also a small scientific research center.

The archipelago of Cayos Cochinos is a unique destination for those travelers that want to escape from crowded and noisy resorts. There are no roads on Cayos Cochinos, which means there are no cars or bikes. Only boats serve as a way for transport. However, there is one nice hiking trail that connects the beaches and residences located on Cayo Grande. At the highest peak of Cayo Grande, there is a lighthouse which can be accessed by walking through a scenic forest. Besides two fishing villages of Chachahuate and East End, at Cayos Cochinos there are about ten private residences and half a dozen homes spread on the thirteen smaller keys. The islands can be accessed by boats coming from La Ceiba, or by charter boats that go from Roatan or Utila.

Cayos Cochinos are one of the most important parts of the Mesoamerican Barrier Reef System, and its environment and waters have been protected as an ecological marine reserve since 1994. There is a very rich flora and marine life that cover an area of almost five hundred square kilometers. Commercial fishing, as well as fish trapping, is forbidden within the marine park. However, local Garifuna inhabitants have permission to fish only with hand lines. In some specially designated areas qualified local Garifuna fishermen can also catch lobsters.